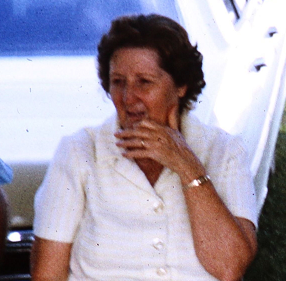 A story told by her older sister Frances. Photo is Dorothy Cunningham Vaughn in the early 1970's.

Dorothy had two older sisters, Kate and Jeweline (as Frances was called throughout her childhood) and one older brother James. Many of the stories for the 1977 book “Family Ties and Memories” were related by Kate and Jeweline especially about the early years. The following is a vivid memory Jeweline had of the day Dorothy was born.

“By the time the fourth child, Dorothy Faye, came along, having babies was a pretty common thing around the Cunningham household, but Grandma Cunningham came to stay and help with the little ones anyway. Jeweline had to use the potty in the middle of the night and Big Mama was so uncomfortable she just told her to find the pot under the bed for herself. After several unsuccessful tries, Jeweline settled for what to her was an acceptable substitute –Grandma’s big wallered-out shoes. It was not quite as acceptable to Grandma the next morning however.

Another memorable thing about that day was the supper meal. Grandma couldn’t find anything for the children to eat in the kitchen except some old coffee and biscuits, so that is what they were fed, cold biscuits soaked in cold coffee.”