They Share Sixty Years of Good and Bad Times 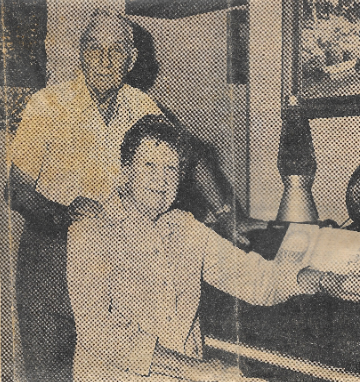 If they put a great magnet way up in the heavens somewhere, it would come down right here in the middle of Hamilton – the best place in the world,” says a “transplanted” Hamilton couple of their adopted home.

Mr. and Mrs. T.C. Cunningham have spent over half their lives in the Hamilton area but were born, reared, educated, and married, and they began their family in Alabama.

This pair of “senior” citizens appear different in personality and outlook – but quite devoted and harmonious, proving that indeed opposites do attract and do make a good marriage.  While “Pop” is a quiet introvert who prefers to sit quietly and listen to others talk, “Big Mama” – as her children and grandchildren call her – is a lively extrovert who enjoys chatting, meeting people, going places, and staying “in the swim.”

Mr. Cunningham was 79 in March, and Miss Myra was 80 in February.  Neither of them looks it.

“I always dreaded getting over the notch,” she says of reaching octogenarian years – or any other decade – beginning of birthdays.  I just kept putting off thinking about it – not wanting to reach that mark.  Then when it came and went, I didn’t feel a bit different – like doing the same things, enjoy life just as much – and now I’m looking forward to being ninety.”

Both grew up in Alabama – she near Vernon where her mother was a teacher and her father a music director and coordinator;  he between Winfield and Fayette where his father was a Baptist minister and a farmer.

In 1914, the Cunninghams moved almost next door to the Sanders family and she met him.  One day she was working on the family washing at a big spring nearby and he came from plowing to water his mules.  Her mama had gone to the house to prepare dinner and the two young people did a bit of visiting.

Thereafter, he wrote her little notes and left them under the wash tub; and she answered them, posting them in the same secret “mail box.”

When the courting got serious, she quit her schooling to make the quilts and prepare for a new life.  She recalls that a big gale had come the previous year and blown all her daddy’s cotton out of the bolls.  The family picked this up from the ground, sold what they could, kept what they needed.  “I was carding the cotton for my hope chest quilts, “  she laughingly recalls.  “I would shake it clean, pull it, and card it.  It took me a long time to get a little box full;  and a spark flew out of the fireplace and burned up every bit of it in a minute.”

But she got the quilting done and he worked to make enough to get started on.  He rolled logs all day before the wedding and borrowed a buggy and a pony for the big event.  On February 26, 1916, the local justice of the peace married them in her father’s front yard, the young couple sitting proudly and happily in the borrowed buggy.

In their early married years, they lived at Bluff, Alabama, where Mr. Cunningham worked with a farmer who also had a sawmill and a gin … but because he was “too good and trusting and didn’t get the promised pay,” they moved back to his father’s place where their first child was born.

Thereafter, they share-cropped, moving often, working hard, always living in someone else’s house – making do with what they had.

When the fifth child was a small baby, they moved to Monroe County.  Mr. Cunningham followed the sawmill and lumber business, and they lived first on what is now called the “old flower farm” while he worked for Pine Dimension Lumber Company.

In 1920, Mr. Cunningham had suffered a disabling sawmill accident in which he lost an inch and a half of his heel and which left him with a permanent and painful limp.

After their first years in Monroe County the family mainly farmed, moving about from place to place, growing crops on the shares.  As the family grew, the children helped out in the field and the large group could get out a good sized crop.

Eight children were born to the marriage – four girls and four boys, including one set of twins.  Today only three of them live nearby; but the family is close and they visit often.

Today there are 27 grandchildren (the youngest just six months old) and 30 great-grandchildren.

During World War II, Mr. Cunningham worked in the shipyards in Mobile and Mrs. Cunningham was a civil service worker at Columbus Air Force Base.  All four boys served overseas in the War.

In 1944, they bought the first land they had ever owned – a farm between Old and New Hamilton.

As the war operations were phased out, he returned to work at the base and she went to work at Dattel’s in Aberdeen – and found a new interest.

“I was watching the land; and then this land along Highway 45 became available, we bought three lots for fifty dollars apiece.”

Sons Ferrell and James were in the building business and started building their parents a home on one of the lots in 1947.  The boys made the blocks and the roof tiles themselves and put up a comfortable attractive home.  Ferrell took one lot for his dry-cleaning, washateria business, and the third went into a new venture for the Cunninghams.

They had sold their land, keeping three nice home sites for the children; and Mrs. Cunningham decided her experience in retailing at Dattel’s was pleasant work- so the building on the third lot became a dry goods’ store.

On December 1, 1948, Pop and Miss Myra opened Hamilton Dry Goods Store which they still operate.  Using a motto “We clothe the family,” the Cunninghams do just that.  The store is small, but there is a fantastic amount of goods in it – from girdles to dresses, from shoes to men’s shirts, from needles to material.

The Cunninghams do not stay in the store all the time, but it is open for business every day.  They have a fancy communications system which lets them know a customer is at the door and they come from the house to wait on him.

One of the Cunningham’s greatest prides is the fact that all eight children graduated from Hamilton High School. “Those were hard years,” recalls Mrs. Cunningham; “I took in sewing – made three dresses one day on a trindle machine, sewed and made over clothes for the children; they worked, we all worked – and we made our educational goal.”

After all the years of work and rearing children, the Cunninghams are still “in the store” but take life a little easier – doing the things they enjoy.

He enjoys cooking and “puttering” around the house and sitting next door in his son-in-laws machine shop.  Her greatest pleasure in life is music.  Two or three times a week they drive at least a hundred miles to singings, mostly in Alabama.  She is much in demand as a pianist at these affairs and “when I’m playing and they’re singing till the roof quivers, I am happy all over.”

Both are in fair health, neither wears glasses except to read.  Both are as mentally alert as 20-year-olds.  In recalling their long life together, Mr. Cunningham came up quickly with exact dates and places of family events many years ago as well as more recently.  Both enjoy traveling and fly to see their children in other states when the notion hits them.  They have visited every state in the nation, including Alaska, except Rhode Island – “and we’ll probably get there yet.”  They have also toured Canada and Mexico.

They both enjoy young people and are slow to criticize today’s youngsters, thinking they need more guidance and less criticism.

“Does he have any faults?” we asked Miss Myra.

“Not bad ones,” she says smilingly.  “He’ll slip over there to the shop and I don’t know where he is; and he smokes but he does that away from the house. (I hate tobacco, won’t even eat a piece of chocolate candy for fear it’ll show on my lips and somebody’ll think I’ve been dipping snuff.)  But Pop’s a happy person generally and I’m thankful for him.  I can’t complain about him much.

“Does she have any faults?” we asked Pop.

“Well, not much.  A car can’t crank but what she’s grabbing her shoes to get in it and go somewhere.  She really likes to go.”

Miss Myra chuckles and agrees with him.

Next spring, they will celebrate their sixtieth wedding anniversary – “if we don’t forget about it till it’s already over,”  they joke.  In the meantime, they have come a long way together since the notes under the wash tub.