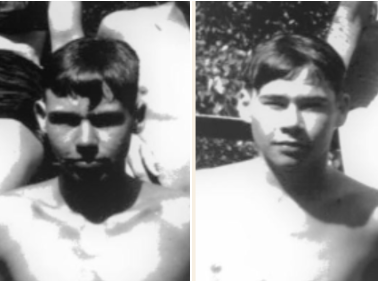 (Note:  “Daddy” in this story is Prentice Sanders, son of James Marshall Sanders and Emma Springfield.  “Momma” is Prentice’ wife, Edna Boman Sanders. “Ross” is a first cousin to Bob on his Mother’s side.)

We got to talking about shotguns the other day.  Somebody had a Franchi automatic for sale, and the discussion involved how to pronounce it.  I said I didn’t know, but since the Italian singer with the same last name pronounced it Fronk-ee I figured that’d be a pretty good guess.  But the head of the Zeppelin Department over at East Alabama Male College proclaimed that the man who ran the general store at Grinders Switch or wherever it is he’s from called it Franch-ee, and his tone of voice bode evil to any man who disagreed with that, so I didn’t pursue the matter.

The Z.D. head went on to say that the man had said that it was a good gun, well put together and everything, and I said that the ads in the outdoor magazines certainly made it look and sound good. Then we went on to discuss and compare Brownings and Remingtons and Winchesters, etc.  It made me get to thinking about my early shotgunning experiences.

Our earliest family shotgun was an old hammer type double-barrelled model that was ancient when I was born, probably when Daddy was born.  To tell the truth, I don’t know how long it had been around then or where it originally came from. I must inquire about that. Anyway, that’s the gun Daddy would use when he’d go down in the bottom with old Buster to try to get a squirrel or two for Momma to fry up and smother with gravy and serve with hot biscuits.

Also, there was a little single-barrel 410 that had once been some kind of .44 caliber affair but had been altered to take 410 shotgun shells.  It would never extract the empty hulls, you’d have to take a stick and ram it down the barrel to get the old hull out.

There came a time, as it comes to all boys, I suppose, when I got up enough nerve to think about shooting the old 12 gauge double.  I had been shooting my Daisy Red Ryder BB gun and a 22 rifle, and even a few times the 410 from the time I was, oh, six or seven, always with the necessary rules of shooting safety being shown and drummed in.  To those, unlike most instructions, I paid attention.

Ross and I got down the 12 and two or three shells and headed down to the bottom.  We walked out by the Ridge Field and then straight down the steep hill to our upper pasture.  It was a clearing of some two or three acres where we had instituted some more or less modern pasture technology, that is, we had actually plowed it up and fertilized it and planted some Dallis grass and white clover there.  To understand the significance of that you have to realize that in our area at the time the pasture was land that was too steep or wet or poor to grow anything else. You just put a couple of strands of barbed wire around the place and told the old cows and mules to make out as best they could.

Well, that’s where we were.  There was a big beech at the south end of the clearing.  Ross and I got about 30 yards away from it and commenced to dicker about who would shoot first.  I generously offered to let him go ahead, but, true gentleman that he was, even then, he insisted that I be allowed to take the first shot.  But he didn’t have all the gentlemanliness in the Mt. Pisgah community tied up by a long shot. I was adamant that, since he was my guest as it were, he should have the first go at the thing.

This went on for quite a while, till we finally decided to flip a coin about the thing, to make it all according to etiquette and everything.  So I found a penny somewhere in one of my overall pockets, down among my Tuf Nut pocket knife that came free with the overalls and my Captain Midnight Secret Code Ring and the fish hooks and slingshot and other essentials.

“Call it,”  I said. He called heads and it was tails, so I made him go first.

He inserted the blue Peters shell and backed one of the hammers and aimed at the beech and closed his eyes and blazed away.

“Why,” he said, picking himself up from the soft grass, “that was easy.  Nothing to that at all. Anybody could do that.” I noticed the way his right arm hung limply at his side.

But it was too late to back out.  I also noticed that my shell was one of the high-powered kind, with the brass part sticking way up there.  I stuck it in, closed the gun, backed the hammer and pulled the trigger, all kind of fast, so I wouldn’t have much time to think about it any more.

Later, when Ross and I would discuss it, we’d talk more about the pattern of the shot on the smooth bark of the beech tree and what good shots we were to hit it and everything.  We didn’t talk about how the old gun spun me around and knocked me down and practically jumped up and down on me. We gradually found out that you’re supposed to hold a shotgun snugly to the shoulder, etc., especially if you weigh about 60 pounds and it’s a blunderbuss and the shells are high-powered.  And we discovered that the old gun really wasn’t designed for heavy loads anyway, that it came unbreeched when you shot one in it, in addition to pommeling the shooter soundly.

But these things a youngun had to learn.  We wore our bruises proudly as they turned slowly from black to greenish and faded away.