Playhouse in the woodpile 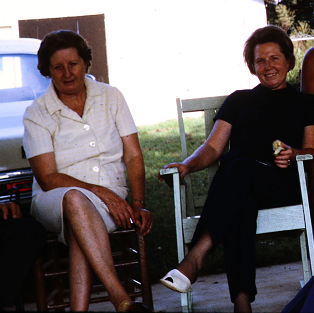 Dorothy and younger sister Tillie in the early 1970's.

Because the older two sisters (Kate and Frances) were close in age and were in the same grade in school, the younger sisters Dorothy and Tillie were often playmates. The following story happened while the family was living at the Joe Stevens house which dates it to sometime between 1923 – 1928. Toys were scarce and greatly treasured. Their loss was felt deeply and remembered for a long time. Such was the case in this story told by Tillie.

“. . .the younger children occupied themselves with such games as stick people dressed with scraps of cloth, a wagon built by older brother James and one year Tillie got her first doll for Christmas. Big Mama had made the head out of a gourd and it even had blue eyes that would roll open and shut. The doll made it through a lot of playing until one day Tillie and Dot were playing in their house in the wood pile and Big Mama walked up to see what they were doing. She stepped on the doll’s head and crushed it to pieces. The girls were extremely disappointed but not as much as Big Mama whose hard work had been ruined.”