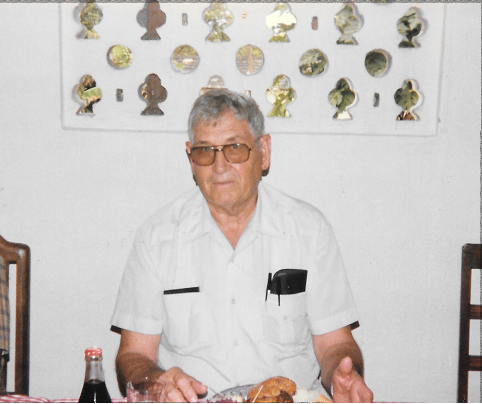 The following  story was  submitted by Ferrell to the Guideposts Magazine in 2015 for their “Mysterious Ways” section.  It was never published, but was enjoyed by Ferrell and his family along with his other memories from his mission trips to Cameroon, West Africa in 1995 and 1997.

The Presbytery of St. Andrew is composed of 64 Presbyterian (U.S.A) congregations in north Mississippi.  In the summer of 1997, I was a member of their third partnership trip to Ntem Presbytery Cameroon, West Africa.  Our party began our travel by flying out of Memphis, Tennessee.  It was my second mission trip and since I wanted to track our actual travel time, I had decided to change my watch only once at the end of the journey instead of changing it with each time zone we traveled through.  When we reached Cameroon, we had been traveling a little over 25 hours including flight times and layovers.  We were all anxious for the long tiring trip to come to an end so we could get some much needed rest.

Even though our air travel was done, we still had several more hours to travel by vehicle.  We were met by our local host who had arranged for transportation for us to our final destination.  Since his conversation with the local drivers was in Bulu, we were unaware that the last leg of our journey was to be with us standing up in the back of two pickup trucks.  In addition, there would be no room for our luggage which would have to be picked up later.  Traveling standing up in the back of a pickup is a common form of travel for the people of Cameroon, but would have been a difficult mode of travel for a tired 74 year old man from Mississippi and his equally tired travel companions.

Just as our host was making final arrangements for storage of our luggage, we heard a strange rumbling approaching.  A smiling man in a college bus came to a rattling stop immediately in front of our group.  He had heard over a radio broadcast that we were coming and wanted to pick up a fare if he could to supplement his income.  He didn’t know exactly when we would arrive, but he drove to the airport anyway hoping we would still be there and might be willing to hire him.  He was hired on the spot and we boarded our “miracle bus” blissfully unaware of how lucky we were for his timely arrival.

Our bus ride was mostly without a problem, except for the time we had to turn the bus around and return to the checkpoint we had already passed.  One of the now-available pickups was following us with our luggage but it had been stopped because the guard at the checkpoint was suspicious of that much luggage belonging to one driver.  After our verification that the luggage actually belonged to all of us, the pickup was released to accompany us to our destination which we reached at two o’clock in the morning.  Even at the late hour, our hosts had a hot meal awaiting us.

Later, we reflected that the “miracle bus” that showed up at just the right moment for the last leg of our journey was not the result of any meticulous planning and preparation on our parts, but that both we and the bus driver were without a doubt the recipients of God’s Amazing Grace and witness to His Mysterious Ways.