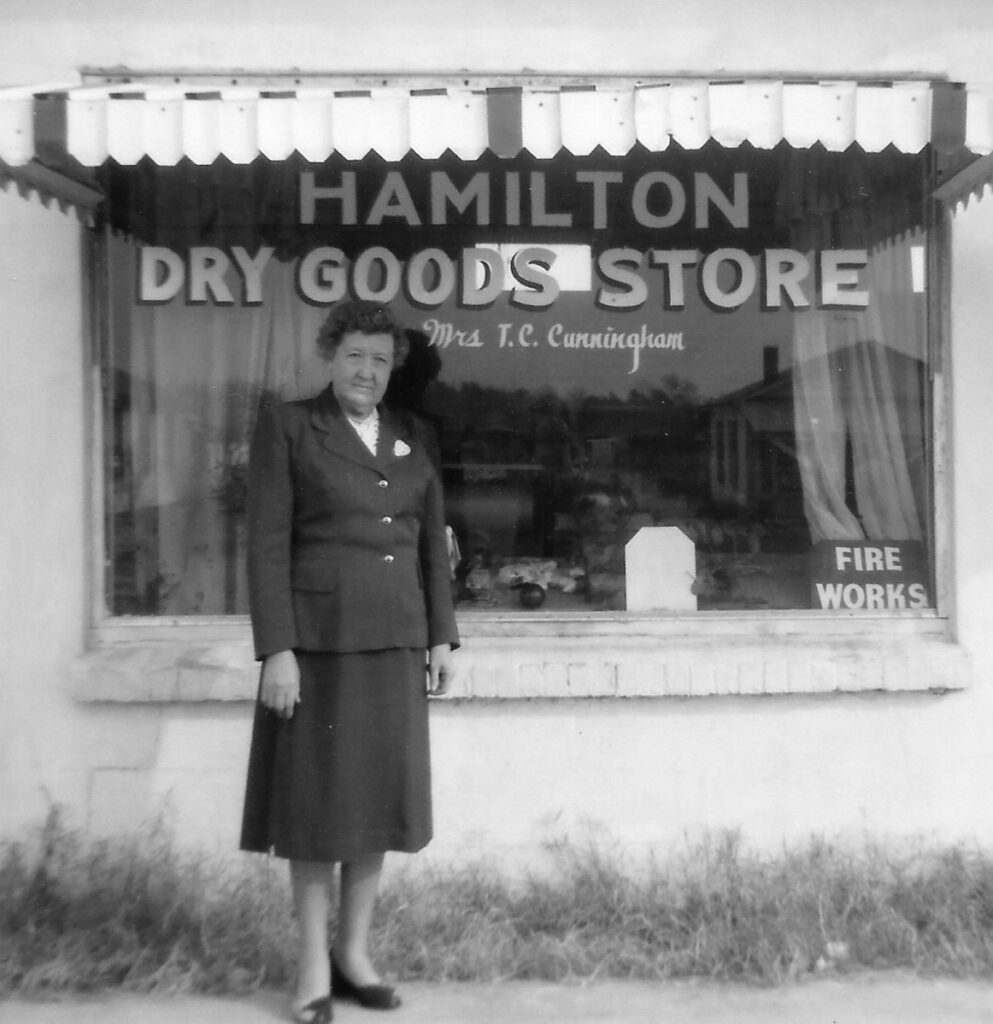 Big Mama at her store in Hamilton, Mississippi. (Janis is the daughter of son James.)

From the files of Legacy Keeper Janis McCoy

My dad – James Denton Cunningham (1920-1982) was the oldest son and third child of Myra and Cosby Cunningham. Although we moved around some as I was growing up, most of my childhood was spent in Hamilton, MS, where Big Mama and Pop owned and operated Hamilton Dry Goods Store.   I have many memories of “Big Mama” – Myra Agatha Sanders Cunningham; most of which center around being in and working with them in the store.

Even before I started to school I loved hanging out in the store, and it wasn’t long before I was taught where the shirts, pants, shoes and other merchandise were stored in the back room and could read the numbers on the boxes to “run go get” a particular size shirt, or whatever, and by showing me the box it came in, I could generally find it.  My reward for helping in the store was usually a piece of bubble gum or a piece of candy. Another common task I often performed for Big Mama, when she needed help in the store, was going to “the shop” – Winders’ Garage, which belonged to Uncle James and Aunt Kate Winders – where Pop loved to hang out – probably because he could smoke there without bothering or being fussed at by Big Mama.

As I grew older, I learned to measure and cut material – when there was a lot to cut. I learned how to measure a yard by holding the end of the material and stretching my arm out – from the tip of my nose as far as I could stretch my arm was about a yard – Big Mama always gave a little extra just in case it was needed.  I also vividly remember driving Big Mama in her Henry J to “go collecting.” She sold goods on credit, which was helpful, since most people farmed and really only had money when crops were being harvested or when government assistance checks arrived. I can remember Big Mama telling people exactly how much they owed her, when and how much they had paid her last.  She seldom refused credit, but it wasn’t uncommon for her to get the buyer to promise her payment on a specific date. If people went “too long” without making a payment, Big Mama would pay them a little visit – at their home – just to remind them. It didn’t matter where they lived, a home visit was extremely effective, either in getting a payment or promise of one in the near future.  And it didn’t really matter how much they paid at a time, as long as an agreement payment was made at an agreed upon time. Even in the day prior to stores being open 24/7 – Big Mama ran a 24/7 business. The bell in her house would let her know when someone was at the store, and either she or Pop would quickly respond; even sometimes on Sunday mornings (before they left for a singing) or late at night – she knew that sometimes family emergencies don’t always occur at convenient times.  Those are the qualities I feel she had a good business as long as she and Pop were able to keep the store open.

There were some manufacturers she would go to in person so that she could pick out exactly what she wanted to purchase.  The only one I personally remember going to with Big Mama was a shoe manufacturer, which I believe was in Fulton, MS. However, the more common way she got her merchandise was through salesmen who “called on” the store.  Sometimes they would actually have merchandise she could pick from, other dry goods were ordered and received later. It made me feel important, when Big Mama would occasionally ask my advice on something she was considering for the store. One of the only “bought” dresses I remember having as a child was a plaid dress I picked out when the salesman came – Mom made most of my clothes, so having a store-bought dress was a real treat for me.  One of the other purchases I made at Hamilton Dry Goods, from Big Mama was a doll. Big Mama offered to let me have it on “credit” but Dad made me save the full amount and pay for the doll before I could get it – may be one of the major reasons for many years I refused to buy a lot even using a credit card.

Just because Big Mama had a store full of material, threads, and buttons didn’t mean she wasn’t frugal – probably a result of raising a family during the Depression.  It always amazed me that when a dress or other piece of clothing tore or wore out, Big Mama would actually unravel the hem and save the thread – Big Mama made a lot of her own clothes, especially those she wore for “every day.”  She would also take out zippers and take off the buttons for future use. Around the door handle to her bedroom there was always a collection of rubber bands – I never knew her to throw away rubber bands, twine, paper clips, safety pin or anything that could be reused.

To say Big Mama, and probably Pop too, enjoyed traveling is an understatement.  When the word “go” came up her response was usually “where” and/or “when.” Dad and Aunt Kate were Big Mama and Pop’s only children that lived in Hamilton, so she and Pop had lots of opportunities to visit children in Kentucky, Ohio, Kansas, Missouri, Michigan ( or where ever Aunt Frances and Uncle Albert happened to be living at the time).¹  One of the things she would do was get a rock or stone from where she visited, then she would paint a picture and put the state’s name from which it came.  She was pretty good artist and was always drawing or painting something.

Probably the thing Big Mama was best known for in North MS and North AL was her piano playing.  As far back as I can remember Big Mama had a piano and loved to play. Any day she got a new gospel song book in the mail was a great day for her – she would immediately sit down and play new songs from the book.  I wish I had gotten even a little of her musical talent – she allowed me and even encouraged me to use her piano to practice when I took lessons from Miss Sally Peck Rye and Mrs. Nelda (Joe) Owings. Unfortunately, even with all the practice I did I never got good – the best of my piano playing came later when my cousin Emma Nell Winders Dahlem taught me to play using the guitar chords for the bass notes and just play the treble notes on the music.  I guess the reason Big Mama was so good (although I suspect she played at least partly by ear) but she always told me she didn’t know how to read music by its position on the lines of the written music; she played by the shape of the notes. She not only played by the shaped notes written but added her own flare to it – ending most songs with great fanfare.²

Big Mama was the fourth child of James Marshall Sanders (1868-1939) and Emma Springfield Sanders³ (1866-1947).  She grew up in Lamar County AL, near Vernon. When she was about 16, she met Thomas Cosby Cunningham (1896-1977) and  on 16 Feb 1916 they were married.⁴ The story is told this way in the Sanders Family History: “One day Myra was doing the family wash at the spring and Cosby (Pop), who had been plowing, brought the mules down to water.  They struck up a conversation, and from that day on, left notes for one another under the washtub. Pretty soon the courting became serious. Myra quit school and began making quilts and other things for her hope chest.

“Cosby (Pop) worked in sawmills, on road and railroad construction, share cropping, and in the shipyards in Mobile.  Myra, in addition to raising the family, worked at the Gulf Ordinance Plant in Aberdeen, MS during WWII. Afterward she worked in a retail store in Aberdeen, which eventually led them to open a dry goods store in Hamilton, MS, where they lived the remainder of their lives.”⁵

Their life together is recounted in Family Ties and Memories; a collection of stories and genealogical information by Sandra Cunningham Foster and Janis Cunningham McCoy published in the summer of 1977 by Uncle Glenn and Aunt Ginney Cunningham at Purdue Press.⁶

after his death Edward Wojtusik¹º

Big Mama died in April of 1983.  She is buried beside Pop in Odd Fellows Rest Cemetery in Aberdeen, MS.²³

³ US Federal Census 1900 and Death Certificate

²² Death Certificate and photo of tombstone