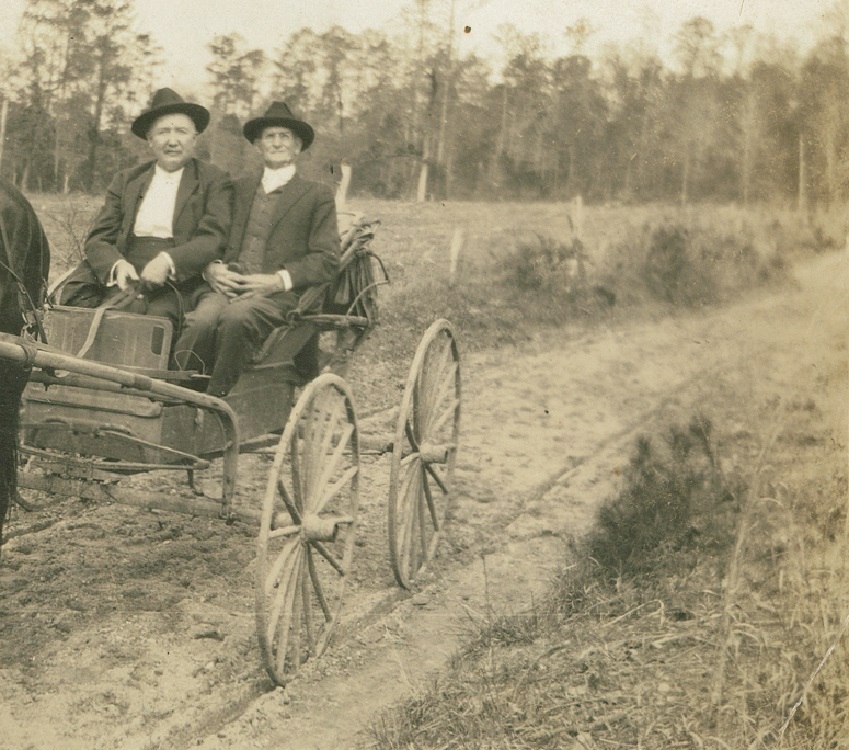 James Sanders and Alex Perkins on their way to church.

(A story from “Friends, Family and Frontier Country” by Bob Sanders, grandson of James Sanders,  one type of church service they may have been attending.)

In comparison, present-day revivals are pretty tame affairs.  Remember how it was at the hundreds of country churches just a few years ago?  This was one of the big events of the year.  After all, there weren’t many big ones.  Plans had to be made.  Who would feed the visiting preacher, who would ride with whom, that kind of thing.  As I recall, there wasn’t much ado about trying to get people to go.  If you were in the community, you went.

Two services a day.  One at 10:30 or 11 in the morning — they weren’t overly precise about the starting (or ending) times in those days — the other one at 7:30 or so at night.  Mostly women and kids at the morning service.  After all, even the most devout men had a living to earn — farming, probably, or sawmilling if the crops had been laid by.

Sometime, depending on whether there was cotton to be hoed or chopped or corn to be thinned, this was something of a holiday for the young’uns, because usually in the afternoons, the whole crowd would head for the swimming hole at the Iron Bridge, or Bailey Creek, or the local equivalent, for a joyful afternoon of trout-and-the-minnow and rolling in the dusty road in the bobbed-off jeans that served as swim suits and diving in the icy waters of Yellow Creek or Little Yellow Creek.  Watermelon, of course, in season.

The night service was when things really got down to business.  The men folks came too, then.  Some families came in cars, some came in wagons, and a whole bunch of folks rode the flat-bed trucks used by the peckerwood sawmillers in the area, with little legs and big legs hanging all around as the dual rear wheels threw up an awesome cloud of dust that hung in the muggy summer air for minutes at a time.

No choir.  Everybody was the choir.  “Let’s sing number so-and-so,” the leader would say.  Some good sister would pound away on the piano and away they’d go.  Then after several prayers, each of which today would be considered a pretty fair sermon, lengthwise at least, the preacher would commence.

He knew what to do.  Most of the members didn’t want any lesson or lecture.  They wanted fire and brimstone.  And as he sipped water and the sweat poured, he gave it to them.  The kerosene lamps would flicker, sizzling an occasional unwary bug, and the funeral-home fans would be busy as the tots slept on the quilt pallets in the aisles.  A few of the men would listen in greater comfort from the bed of the truck, which would be parked right by the building.

And finally, no polite invitation.  Exhortation or threat might be better words.  And for those who were on the borderline of “making a decision,” there were many “one-more-verses” and personal consultations to help things along.

Then, after the benediction, the sleepy youngsters would be gathered up, and after a little pleasant gossip everybody would go home.  Tomorrow would come early, with a lot of “thangs” (chores, to the uninitiated) to be done, and another day of the protracted meetin’.