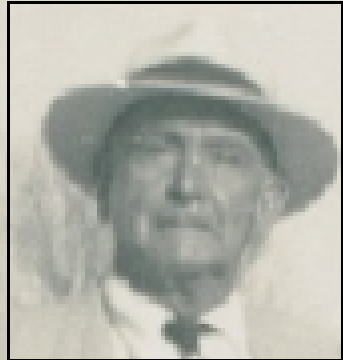 I had this great-uncle, Uncle Harvey.  He was Grandpa Sanders’ youngest brother, and he was, in many ways, a doozie.  They just don’t make them like Uncle Harvey anymore. He was continually in search of a treasure that was supposed to be buried on the home place.  Both he and his sister, Aunt Lulie, were convinced there was something of value in a hollow near the Ridge Field. The place came to be known in family circles as the Glory Hole.  It was a hole that got bigger and bigger. It is said that Uncle Harvey and Aunt Lulie would sneak out to it at night, separately, unbeknownst to the other, and dig some more, hoping to find the gold or whatever they thought was buried there.  Uncle Harvey had had a vision about it, he said. Daddy used to snort at such foolishness. He loved to tell about the time Uncle Harvey got hold of some early metal-detecting device and found–at another place–a “treasure” of old horseshoes. He was a highly original composer, too.  It was Uncle Harvey, you’ll recall, who wrote these immortal lines, “‘Neath the spreading white oak tree, the village blacksmith….” He was just as good at writing songs that he would introduce as originals at all-day singings.

‘Twas he who also built Uncle Kent’s house.  He was a carpenter of considerable notoriety.  Uncle Kent said he wanted the house to be a copy of lawyer Oliver Young’s down at the edge of town.  Not as fancy, of course, but the same general floor plan. Came time to cut the rafters for the main part of the house. After the cutting, Uncle Kent mildly ventured a tentative opinion.  “Er, Harve, don’t you think you cut ’em too short?” Whereupon Uncle Harvey commenced to bluster, as he was wont to do, things like, “Huh, how long have I been building houses? Think I don’t know how to measure?  I know what I’m doing. Don’t bother me,” etc., etc., etc. Uncle Kent’s roof is much flatter than lawyer Young’s. But what Uncle Harvey was most famous for was a medicinal concoction he invented. Oh, he believed in it.  When our illustrious Uncle Kelley was dying of Hodgkins disease, Uncle Harvey wrote him a most poignant and pleading letter, saying that if Kelley would only take some of his medicine, he’d be cured. Uncle Harvey even got a drugstore or two over in Mississippi to stock it and sell it.  Nobody knew the exact formula. It had a lot of whiskey in it, Daddy said. One vital ingredient was something Uncle Harvey called sarvice bark. Periodically he’d go down in our bottom, sometimes with Uncle Kent, to search for a sarvice tree. Nobody else ever knew what a sarvice tree looked like.  There was an aura of deep secrecy about these projects.