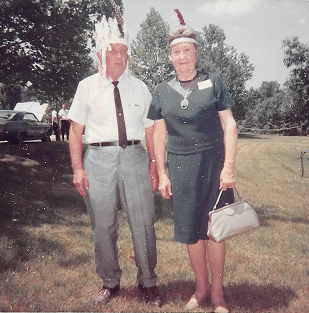 The following memory, told to Legacy Keeper Sandra Scott, is from Glenn Cunningham (son of Big Mama and Pop).

Cunningham family reunions were always well attended by members of the Cunningham Clan.  The children took turns having the event close to their homes so that travel was not always required of the same family members. Without a doubt, the reunion that stuck in the minds of many members as one of the best was the 1968 reunion which was held out in the country at a lake close to Paducah, Kentucky.  Paducah was the home of Big Mama and Pop’s daughter, Dorothy, and her husband Charley and their family.  Glenn and his wife, Ginney, also helped with the event.

Glenn remembers this 1968 Reunion well.  He states that there were over 90 family members in attendance, making it one of the biggest.  The lake setting was beautiful with private cabins rented for the entire group and areas where they could share meals and sit around in lounge chairs enjoying each other and the scenery.

The reunion was held on Father’s Day weekend so the four organizers (Dot, Charley, Glenn, and Ginney) thought it would be appropriate to make Pop a special gift to honor him as “the Big Chief of the Cunningham Clan”.  With this goal in mind, they made a feather headdress for Pop to wear at the reunion which contained eight large feathers, one for each of his children, medium sized feathers for his grandchildren, and small feathers for his great-grandchildren.   Pop loved his headdress and wore it the whole day!  Big Mama, however, was a different story.  Her headdress only contained one feather and she made sure to let everyone know that in spite of what it looked like, SHE, not Pop,  was really “the Big Chief” in the family. None of us argue with that.