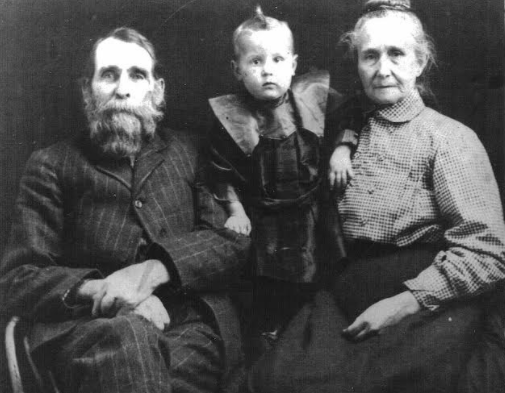 During court week in Vernon, Alabama (when circuit court was being held), people from all over would flock into town.  Many of the men, not wishing to sit at the courthouse all day, would gather to trade horses and mules and swap tales.  Many of George’s kinfolk from south Lamar County and Pickens County would come.  At the end of the day, George would step up on a stump and shout, “Anybody that wants to go home with George Sanders, come on!” and of course, several would, since it was a long way home. George’s wife, Selina, never knew how many would be there for supper, and often had to slip out and kill another chicken.  It was not unusual to have so many there spending the night that Selina and the girls would have to go and sleep in the cotton pens.

George’s daughter, Cornelia “Neely” was an excellent cook, and once made a delicious cream cake for some visitors.  Several days later, one of the visitors commented to George about how good that cream cake was, and that he would like to get the “receipt” from Neely sometime for his womenfolk.  Trying to be as helpful as possible, and in his usual self-confident way, George said, “You don’t need to get it from her, I can tell you how she made it.”  “All right, tell me,” said the man. “Well,” George said, “you just make up a big batch of dough, like for biscuits.  Take part of it and pat it into a circle and put it in a pan, and pour some sweet milk cream over it.  Just keep on like that till you get it as high as you want it, and put it in the oven and bake it.”  When he got home and told Neely about it, she said, “But that’s not the way to make it at all!”  “Oh,” said George, “It’s not? Then I’ll have to see that man and give him the right way to make it.”  Later, when he did see the man, he said, “You know the receipt for that cream cake? My womenfolk said that wasn’t right what I told you.”  “I know it,” said the man, disgustedly.  “My wife made it the way you told me, and it wasn’t fit to eat!”

A few years before he died, George cut his hand while gelding a horse.  Blood poisoning set up in his perhaps already crippled arm and hand and he was a semi-invalid until his death.  His mind was affected, also, although he was lucid at times and could still add a column of figures in his head almost instantly.  He enjoyed teasing the grandchildren by pretending to be asleep when they were sent to check on him.  His wife Selina, was an experienced and well-known herbal doctor who tended to him.

And then there was the time when George’s brother-in-law, John James and his wife Sarah (they pronounced it “Surry”) were having some marital problems, and John was staying with George and Selina for a while.  All during the day, each time George saw John (which would be many, many times), he would raise up on his cot, look John in the eyes and solemnly ask, “John, tell me and tell me true, have you and Surry truly parted?” John would patiently answer each time until finally, in exasperation, he blurted out, “Aw, George, I wisht I never had heard of a Surry.”