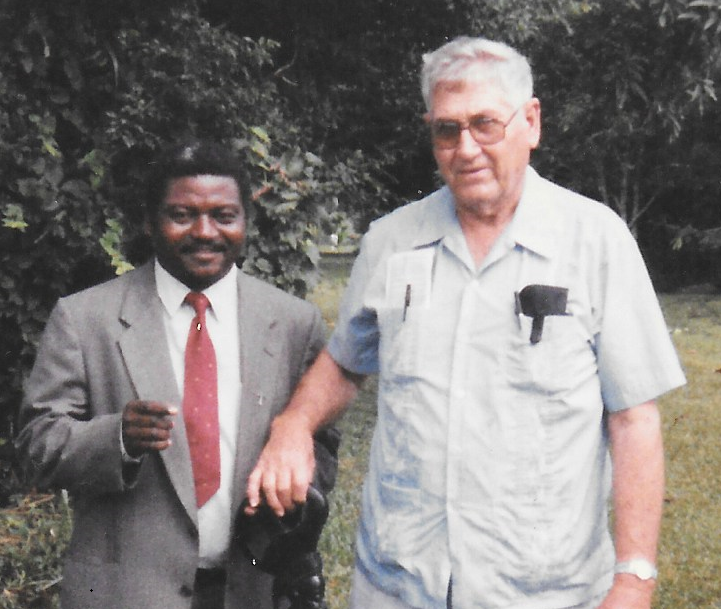 From the Cunningham family files of Legacy Keeper Sandra Scott

In 1995, when he was 72 years old, Ferrell Cunningham was a member of a group from the St. Andrew’s Presbetery who made a mission trip to Cameroon, Africa.  The purpose of the trip was to install portable water purification systems in several towns needing clean drinking water.

However, when they arrived, they were greeted by an excited local pastor who had been building a church for eight years.  He had constructed the walls but had no idea how to put a roof on the building.  In desperation, he had simply prayed for God to provide a solution. Then the small group of people from Mississippi had suddenly arrived.  His hopes were dashed when he learned their mission. The only person on the team who knew anything about building was the oldest member Ferrell Cunningham and he had not come prepared to do any carpentry work.

Just when the situation looked hopeless, Ferrell went to his luggage and pulled out the only carpentry tool he had brought with him.  It was a small handsaw that he had thrown in at the last moment because as he said later – “God had told him to bring it.”  He didn’t know why until he arrived in Cameroon and met the pastor.  The team immediately cut Ferrell loose from his intended mission and he took on the daunting mission of helping the now ecstatic pastor put a roof on his church.

The lumber for the trusses was cut green with a chainsaw in the rain forest and was delivered to the building site balanced on the top of a small compact car.  Each load of the heavy lumber crushed the metal carrier on top of the little car and after each load the driver had to hammer it back into place in order to make the next delivery.

After the lumber was on site, every cut was made with the hand saw Ferrell had brought.  The crew quickly learned to brace their day’s work extra well.  If they didn’t, they would come back the next morning and their previous day’s work would be twisted due to the wood warping and they would have rip it out and assemble the truss again.

With lots of sign language, eventually the trusses were all in place and a tin roof was added.  When the work was completed the grateful pastor and congregation gave Ferrell several gifts in a ceremony.  One very special gift was a live goat which he later donated to a local school teacher since he had no way to bring it back to Mississippi.

After returning from the mission trip, Ferrell reflected that the tin roof was subject to rust especially in the very humid conditions in Cameroon.  He decided that a better option for the roof was concrete roof tiles that would not rust and would last much longer.  Ferrell and his older brother James had a tile machine in their concrete business they had started in the late 1940’s shortly after World War II.  Ferrell still had the machine even though it had not been used in many years.  After digging the machine out of storage and making sure it was still operational, Ferrell made plans to return to Cameroon and donate the machine to the church he had helped build there.

In 1997, Ferrell joined a second mission trip to Cameroon with his and James’ tile machine being shipped at the same time. It was a big event when the machine was delivered in the back of a pickup.

The local workmen cut bamboo sticks in the jungle to construct racks for the tiles.

After it was unloaded and a local shop was set up,  Ferrell made his last roof tile there while training the enthusiastic locals in how to use their precious new machine.

Once again, a grateful pastor and congregation gave him a token of their appreciation, but this time it was a ceremonial walking stick reserved for especially honored elders in their church.

The mission trips to Cameroon were one of the proudest accomplishments of Ferrell’s life and his mementos from them his most treasured possessions until his death in December, 2018.