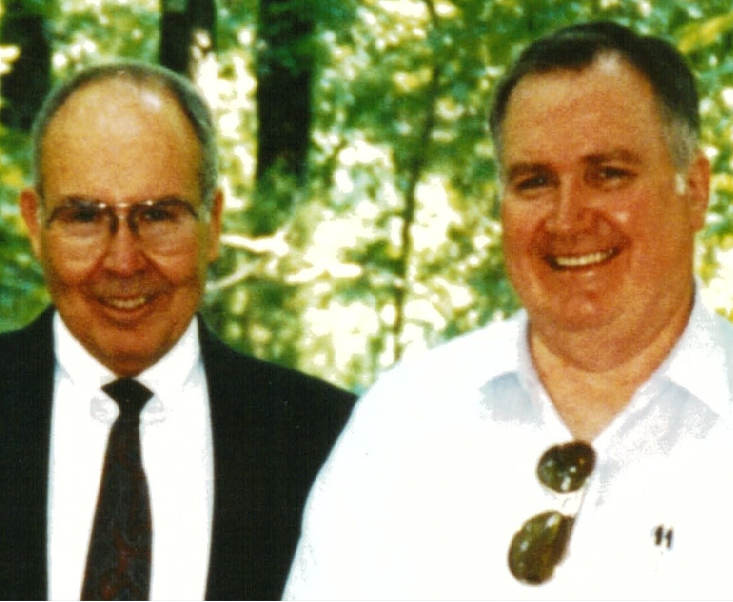 Bob and Jack Sanders, (sons of Prentice and Edna Sanders).

…. Daddy cut hair on the porch. He was real big on haircuts. He used to worry a whole lot more than we did about how our hair looked. He had the whole kit–combs and barber scissors and hand clippers. He cut his own hair, with the use of mirrors. Said he never found a barber who could cut it the way he wanted it. Our barber chair would be straight chairs stacked one over the other, facing each other. In the summertime we’d get in a shady spot on the front or back porch. Daddy’d put the robe that Momma had made from 6-8-4 fertilizer sacks around us and commence to cut. Snip snip snip. Clip clip clip. “Bow your neck, no, bow it way over, like that,” he’d say, as his hand on my head enforced his command. Squirming too much resulted in a tap on the head with the clippers and a “See there! You made me gap it. Now I’ve got to try to even up that gap by taking some off the other side.”

….. Those old bull-leading deals. Let me explain some terminology here. It was a tradition of Daddy and Uncle Kent to bite off more than they could chew, or, to be more specific, more than we young’uns could chew. They were often wildly optimistic about the amount of work we were supposed to be able to do or the obstacles we were supposed to be able to overcome. Some of the most vivid examples of their over-optimism involved the leading of bovines. I cite just a couple of examples so you’ll understand. There was the case of the young Jersey bull which we had borrowed (when he was much smaller) to keep our cows company for a while. After he’d done about all he could for us, Daddy got him cornered and got a rope on him and said, kind of casual like, “Here, how about leading this little old bull down to Dink Reeves.” Well, this bull had never had a rope on him or been touched by human hands since he was a calf. He didn’t take to it too kindly. The first step I took was about 10 feet long, and they grew mightily, rapidly, until I finally hit the ground and was dragged around over the whole community on my belly till he tired of the sport and we were able to get him tied behind the wagon. In another case, I was fortunate enough to get there late and only watched the climactic moments from the safety of the wagon shed. This time it was a white-faced bull that must have weighed upwards of a ton. It was not a particularly vicious beast, but it, too, didn’t know anything about this business of being led. But Daddy and Uncle Kent told Charlie and Tom and Jack to how about just lead this nice, gentle creature from our house up to Uncle Kent’s. Now, Charlie, Jack and Tom were not flyweights. At the time, they weighed in, on the hoof, at a combined total of well over 600 pounds. They might as well have been flies. That bull headed out the back door of the barn with Charlie and Jack and Tom holding on for dear life. They had no more effect on the bull than they would have had on a runaway bulldozer. Jack and Charlie and Tom were hollering at one another and Uncle Kent and Daddy were hollering instructions, and the bull was forging ahead. If they were even slowing him down any I couldn’t tell it. Charlie managed to get a little slack in his rope and wrapped it around a sturdy pine and they finally got the runaway steak stopped and they all, bull, Charlie, Jack, and Tom, stood there foaming at the mouth, panting, and thinking generally bad thoughts. They eventually got him tied to the back of a tractor which was (just) able to induce him to proceed on up to the intended destination. This is why, even to this day, all of us still refer to any complete mess, any total foul-up, any utter imbroglio, state of chaos, disaster or baaaad situation of any kind, as “one of them old bull-leading deals.”

…. Daddy was one of that intrepid generation of fathers, community patriarchs, who scraped and gouged at those red clay hillsides to eke out a living and pull us through the depression, the men who, we knew, would ultimately come up with the answers to all our problems and make everything just fine, the men I consider, now that I think on it, to be my all-time heroes.