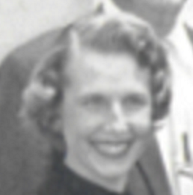 From “Family Ties and Memories” 1977.  Contributed by Tillie Edwards and Billy Cunningham.

Billy and Tillie were born into the Cunningham Clan on August 15, 1925, when the family was living in the Old Joe Stevens House in the Hamilton Community.  Tillie arrived about fifteen minutes earlier than Billy.  According to Billy, he was given the title Billy Joe to rhyme with his older sister, Tillie Clo.  Tillie, on the other hand, claims that she was given her name to rhyme with that of her twin brother.  Although the twins names were similar, their dispositions were not.  Tillie was active and mischievous, while Billy was calm and good-natured.

Billy says that things went very smoothly for him until about the age of 2 1/2 when a baby brother was born and the family tried to move him out of his position as the baby of the family.  He says that he soon became “reconciled to sleeping with Frances” and things were soon back to normal.

Tillie’s memories of her childhood include following her big brother James around, climbing up the ladder into the barn loft, dressing stick people with scraps of cloth to play with in make-believe houses, James making a “great” wagon from wood wheels cut from a tree, Uncle Kelly giving her the first stick of gum she remembers and that it was Dentyne gum.  Tillie also recalls that when the family lived at the house by the railroad there was some tall Johnson grass growing on the opposite side of the tracks.  There the children played church and the older boys would “baptize” the younger ones in the tall grass.  Tillie says that the children put on a play about Adam and Eve in which they made costumes out of some big leaves, held together with thorns from a tree.

One of Tillie’s most delightful memories centers around the time she and Pop went on a wagon loaded with cotton seed to sell in Aberdeen.  She remembers feeling very “big” because she had 15 cents to spend.

Billy says that being a twin did have its’ drawbacks.  He relates that at the age of seven the two of them were considered as an adult when it came to hoeing or picking cotton or other chores around the farm.  They also had to share school books.  When the twins started to school there were two other pairs of twins in the same class.  This resulted in considerable recognition.  Whenever people came to the school or new kids started, all three sets (according to Tillie) would have to line up.  By the way, Tillie still tells Billy to come stand beside her so she can show people her twin.

Billy says that school was a “snap” for him, and with very little effort he received high grades. Tillie tells that her greatest academic accomplishment took place when she was in the 11th or 12th grade.  The class members had to write a four line poem.  Having forgotten to prepare ahead of time, rather than take a zero for the day, she quickly composed the following verse.  “My name is Tillie.  I sure am silly.  I sure am dumb.  All I do is suck my thumb.”  Not only did Tillie get an “A”, but also her poem was posted on the auditorium bulletin board.

Tillie graduated as class historian in 1944, but without her twin.  Billy’s diploma was granted in absentia as he had received a letter of greetings from Uncle Sam in December of their senior year and had already started his military training in the Navy.

After graduation from high school, Tillie left home saying that she would probably only stay two weeks.  She went to Columbus, Ohio, where she has remained since that time.  Three years after leaving home, Tillie married Thomas Edwards on February 18, 1947.  They had two children.