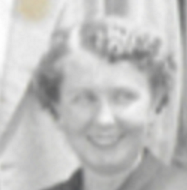 From “Family Ties and Memories” 1977.  Contributed by Kate Winders.

On July 4, 1930, Kate Laurene Cunningham and James Kelly Winders noticed each other for the first time. James immediately began to seek the favor of Kate, but due to their tender age and incompleted education, love and courtship had to wait. During the next six years Kate took time to “date” and complete her high school education. During the courtship of Kate and James, the entire Cunningham family at times acted as chaperones. James had a black Model-T Roadster with a white stripe down the side. He removed the “Monkey box” (also referred to as mother-in-law’s seat) and put in a bed to haul the family around in.

James and Kate were married on Monday, March 23, 1936, at the home of Dr. and Mrs. D. H. Matherly of the First Christian Church in Aberdeen, Mississippi. Mr. Hutch L. and Mrs. Ada Walden and Mrs. Nellie Winders witnessed the ceremony. After their marriage James and Kate moved in the house with James’ mother, a little two bedroom house on Emmitt Reeves place next to where James Cockerham now lives. In January of 1937 they moved into the Captain Dudd Walton house where John Simms now lives. Also living in the house were James’ mother and sisters, Muree and Katie Mae, who stayed with them until December 5, 1940.

During the time James and Kate lived in the Walton house their first three children were born They farmed and James worked as a shade tree mechanic in his spare time. He set up and ran a sawmill for Mr. J. E. Brown in the summer of 1936 where he made $2.00 a day – which was GOOD money. Kate says that at this time she bought James two new pairs of overalls at one time. During the fall months James worked for Mr. Macon Garner at a cotton gin.

In September, 1937, James went to work full time for Mr. Litt Basham in a garage next to where Raymond’s Service Station is now. He worked there until December 31, 1938.

On January 1, 1939, James and Kate went into business for themselves in a little building where Pace Machine Shop now stands. Mr. Hosea Sims owned the building and ran a blacksmith shop on the north side of the building. The name of the place was Winders Garage and Service Station. They sold Texaco gas and oils. This was a B-I-G venture for them. They had to borrow the money to buy tools and equipment. Kind salesmen began, before long, to allow them some credit and soon they were on their way. James’ former customers began to bring in work before he was even set up.

Kate had to manage the best she could to get the crop gathered. One fall she lifted and weighed every sack of cotton. Her weights tallied with the gin weights. Kate had to hire the picking to be done and pay the hands. They hired Marie and Gilford Sigh to make the crop in 1939. The Sighs lived in a tenant house on the place. Business at the shop got so pressing, James used Mr. Sigh at the shop. Paul and Jewel Pounders were hired to help out on the farm. Also, Wilson and Ozell Smith lived in the tenant house and helped part of the time.

Finally in 1940 James and Kate bought the Herman Riefer house in New Hamilton. On December 5, 1940, they got possession and moved in. This was their first home of their own. At that time James Harold was three months old, Garland was 21 months and Lonese was three years and eight months.

From Montgomery Ward they ordered a new wood stove, cooking utensils, dishes, tableware (silver plated), and a few other necessities. Kate says that of all the happy days in their lives, she believes that was the happiest. On that Christmas they had their first lighted Christmas tree, bought their first refrigerator, and a new 1940 Chevrolet.

On the morning of December 7, 1941, James and Kate turned on their little bedside radio to get their favorite Sunday programs when the announcer said, “Pearl Harbor has been bombed.” James was soon classified 1-A and called to report for his physical for induction into the military service. When he went he was told to go home and they would call him later. He never was called. It was not until many years later that the local board advisors told them James was needed at home to keep the tractors and working cars running. He taught defense classes at the high school at night and worked in the day time. Often he was called all hours of the night for repairs on defense workers’ cars. Kate was kept busy the long hours that James worked with the household chores, caring for the children, tending to the backyard garden, and canning.

On Friday evening, June 25, 1943, Dayle, who was only 13 months old, was called home to heaven. Kate describes the baby’s death this way: “There was such a heavenly atmosphere in his homegoing and I felt that it was God’s will to take him, that I could not grieve as some mothers would. Of course he was missed, but it wasn’t long until another son, Joe, was born.” Emma, described as “their little red headed daughter” was born in 1945. Emma was named after Grandma Sanders and Nell, after James’ mother.

In 1945 James and Kate bought the Porter house where they have lived since that time. The Winders family moved on Saturday, May 19, 1945. In August of the same year a building across the highway was started for their shop which was ready by December. Kate began at that time to get very involved in the bookkeeping which she has continued since then.

In 1947 they helped get a church established–First Assembly of God in Aberdeen, Mississippi. They felt they needed a church for their faith and that of their children. Because they could get more help in the county seat than in their own community, the church was built in Aberdeen. Soon the entire family was involved in all types of church work. Kate also got involved in school activities. She served in several Parent-Teacher Association offices and served as president three years.

Through the years Winders’ family activities have included several nice vacation trips. They visited family and friends on these trips whenever possible. They have been on the coast; to the Smokies; to the zoo in Jackson, Birmingham and Memphis; swimming; to auto races and church camps. They built a cabin on the church camp grounds in Hurley, Mississippi and went every summer for several years.

Their children began to marry, and in 1963 physical problems beset Kate. She and James had surgery twice between March and November of that year.

Kate says that Christmases were, and still are, the greatest time of the year for their large family which now includes great-grandchildren.

James retired from the family business, Winders Parts and Equipment, because of ill health, heart and vascular trouble. Kate still helps out with the bookkeeping. They plan to travel and visit in the near future.

James and Kate had seven children. All of them were born in Monroe County, Mississippi. 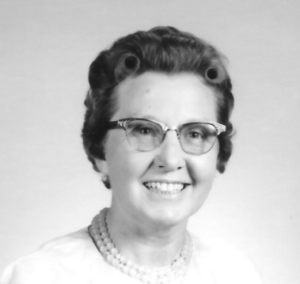 A tribute to Kate from niece Susan Bradle (daughter of Frances)

A tribute to Kate from niece Susan Bradle (daughter of Frances)