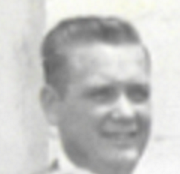 From “Family Ties and Memories” 1977.  Contributed  by Glenn and Ginney Cunningham.

Glenn says ” you have read about the rest, now read about the best”.  On March 19, 1928, the sweetest, sparkling blue-eyed, and the most lovable as well as the last of the Cosby and Myra duo was born.  In pre-teen years he was known to tag along with his older brothers, however, he says that while he did not have their constant companionship and influence when he reached his teens, he managed to have his share of fun and excitement.  His teenage years were made up of entertaining himself while Big Mama worked at the Columbus Air Base and in Aberdeen, Mississippi.

His amusements came mostly by skipping school occasionally, going home and making fudge (always making sure the mess was cleaned up and evidence hidden) before Big Mama got home from work.  Then came the joys of getting a driver’s license and, oh yes, that “hot” 1936 Chevrolet.  Glenn said it would register 80, but with the 20 inch truck tires on the rear, it would do between 95 and 100 miles per hour easily and then stop on a dime.  This was normal cruising speed for Glenn, E. C. Reeves and his brother L. D.  when Big Mama and Pop were not along.  Girls and dating were also very important, but everyone must keep a few secrets.  From all indications, however, one of the best parts of these years was coming home to some of Big Mama’s cornbread and milk.

Glenn quit school in the fall of 1945.  He then worked in Mobile, Alabama, and other odd  jobs until school was out, at which time he and E. C.  Reeves satisfied their wanderlust by seeing some of the country on their thumbs.  Seeing this was getting him no place fast, he decided to return to high school.  Finally, in 1947 the last of the current generation of Cunningham children was graduated from high school.  ( All eight children graduated from Hamilton, Mississippi High School.)

In the summer of 1947, Glenn entered the U.S.  Army Air Force taking his basic training at Lackland Air Force Base, San Antonio, Texas.  Following basic training he spent 26 months in Japan where he was with the 5th Air Force, 315th Aircraft Control and Warning Squadron.  Glenn’s military duties were performed mostly behind a desk.  The one near catastrophe Glenn had while in service was that of writing.  It seemed he was writing to several girls back home.  Somehow they got together and compared letters.  Glenn was honorably discharged from the Air Force in California in 1950 and started for home.  On the way he bought the best car he ever had – a 1940 LaSalle Coupe.

After a visit at home he left home to go to Columbus, Ohio to visit his sister.  While there he got a job and met Ginney Nolen in June, 1950.  They started dating January 8, 1951 and were married April 7, 1951 at the East Columbus Church of Christ by Joe Belcastro in Columbus, Ohio.

They lived in and around Columbus, Ohio for the next six years returning home periodically for visits.  It is fun to recall some of these visits and little trips that were taken with Big Mama and Pop.  In particular comes to mind the trip they made to visit Ferrell and Ellen in Dothan, Alabama (supposedly an overnight trip).  This episode developed into a five day trip culminating in Key West, Florida with only the clothes on their backs (oh yes, Big Mama, Ginney and Judi Anne had a nightie).  They bought the bare essentials as needed – sure was fun.  Another little trip was made to Birmingham where they ended up in Mobile, Alabama and New Orleans.

Glenn and Ginney’s work carried them to Massena, New York, where they both were employed during the construction of the St. Lawrence Seaway project.  One of the major adventures of their stay in Massena was walking in the bottom of Eisenhower Lock before it was flooded for commercial transportation purposes.  On several occasions they drove to Montreal on Sunday, and the sights from the top of Mount Royal, especially at night time were unbelievable. Another highlight was the time Big Mama and Pop came for a visit and they decided to take another overnight trip.  This jaunt found them sight seeing at 1:00 a.m. in Quebec City and then motoring back through Maine, Vermont, and New Hampshire.  These impromptu trips with Big Mama and Pop have always been, and always will be, a fond memory in their lives.

The year of 1959 found them in Dixon, Illinois for a six month period.  Later in 1959 they moved to Monon, Indiana and in 1961 they settled in and around Lafayette and West Lafayette, Indiana where they now reside.  They have been in all of the Continental United States with the exception of Oregon and the state of Washington.  They have also been as far south as Monterrey, Old Mexico and as far north as Quebec City, Quebec, Canada.

Prior to 1963 Glenn had attended business school where he took up accounting and office machines and office procedure studies.  This training led him into various occupations, including accounts payable work, freight manuscript work, insurance underwriting, payroll and timekeeping, purchasing agent, factory inspection and dispatching, as well as police patrolman work, where he was deputized as a county sheriff.  He especially remembers one instance while working for Columbus Packing Company (1951) where he wrote a check for $250,000.

On March 9, 1965, Glenn and Ginney founded their own company known as Cunningham Type & Copy Shop.  Their primary function is complete thesis service for Purdue University students and drafting and typing for Purdue professors for publication and consulting purposes.

On March 10, 1971 came one of the bright spots in their lives.  They were told they were going to be grandparents.  Three days later, Judi and Bill became parents by adopting what Glenn and Ginney are sure is “the sweetest little boy that the good Lord ever put breath into.”  Brad has been a bright spot, joy and delight to his Gran and Pa ever since.

Currently Glenn and Ginney are both members of the Lions International Club where they both hold offices in their respective clubs.  Glenn is a Master Mason of the Battle Ground Lodge #313, on the Board of Directors as well as a volunteer for the Lafayette Crisis Center, a member of the Lafayette Gasbangers CB Club, and a member of the First Assembly of God Church in Lafayette, Indiana.

While time marches on, many things do not change.  Nothing, but nothing will replace a “hot” car to rip and stave in, fudge, cornbread and milk are still “gooder than snuff and not near as dusty” although a little hard on the waist line, and girls are still pleasing to the eye- only a little harder to see with bifocals and an observing wife.  One thing will never change — Glenn will always remain “Myra’s baby boy”.

Glenn and Ginney had one daughter. 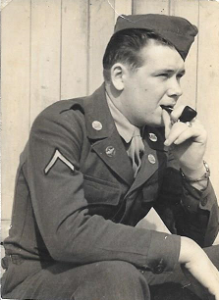 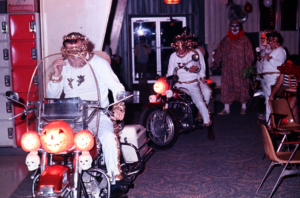 Heaven’s Angels in a bowling alley. 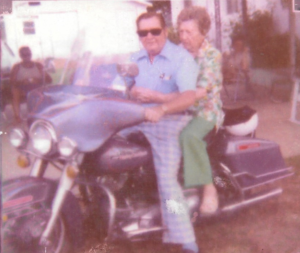 Glenn with his mother on his motorcycle

Heaven’s Angels in a bowling alley.

Glenn with his mother on his motorcycle