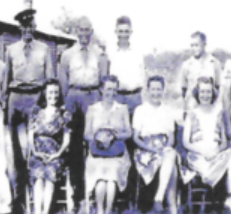 From the Cunningham Family files of Legacy Keepers Sandra Scott and Janis McCoy.