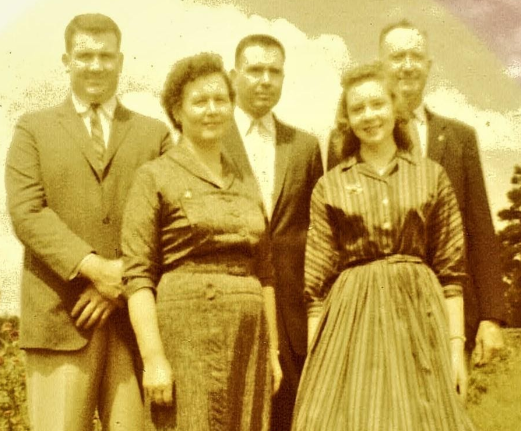 Bob graduated from Lamar County High School in 1949 and went on to Alabama Polytechnic Institute (now Auburn University) where he graduated in 1952 with a degree in Business. He started his career in radio broadcasting soon after at a station in Scottsboro, AL. After being drafted into the U.S. Army, he worked for a short time at WACR in Columbus, MS while waiting to be inducted into the service. After serving two years in the Army, some of which he spent in Germany, working on communications and radio, he was discharged with the rank of Corporal. He then went to Auburn, AL and started work at WAUD Radio Station in 1955, where he worked six days a week for 61 years. Not only did he do his popular early morning show, but added the Classical Hour later in the day, in addition to selling and advertising all morning. He was a popular local radio personality and quite well known around Auburn. In 1985, there was a “Bob Sanders Day” in Auburn, celebrating the 30th anniversary of his move to Auburn and WAUD.

For many years he wrote a weekly column, “Esoterica for Everyone” for either The Auburn Bulletin newspaper or for The Opelika-Auburn News. Bob’s articles have been published in The Progressive Farmer, Alabama Life, and Alabama Living magazines, and regularly appeared for a time in The Auburn Alumnews. In 1999, he published a book of selected articles he had written, called Family, Friends & Frontier Country.

(NOTE) You will see many excerpts from Bob’s book throughout the “Sanders Section,” recalling family stories, relatives, and memories of growing up in Lamar County, AL.

Peggy graduated from Lamar County High School in 1953 and has made a career of being a supportive wife and mother. For several years she enjoyed working part-time at a friend’s dress shop in Opelika, AL. Bob and Peggy are members of the First Baptist Church of Auburn where he, at different times, taught a Sunday School Class.

Jack graduated from Lamar County High School in 1955; received a Bachelor’s Degree in Aeronautical Engineering from Auburn University in 1959; and received Master’s Degrees in Management (1990) and Business Administration (1993) from the Florida Institute of Technology Graduate Center at Redstone Arsenal, AL.

Jack’s career in aerospace engineering spanned over 40 years working on various aircraft, space and defense-related programs with three different companies. About a year (1959) was spent at North American Aviation in Columbus, OH working as a designer on the F-108 fighter aircraft. Eighteen years (1961-1978) were spent with Teledyne Brown Engineering in Huntsville, AL working as a designer and as a structural analyst on space and defense related programs such as the design and development of the Saturn launch vehicles, the Apollo Applications (moon landing) Program, the Skylab development, and the MX defense deployment system. In 1978, he started work with McDonnell Douglas Corporation/The Boeing Company in Huntsville, AL working on Spacelab (a returnable, and sometimes habitable, payload on the Space Shuttle); on Space Station programs as Chief of the Strength Analysis Section; as the Spacelab Technical Manager for Analytical Engineering; as Manager of Spacelab Module Structural Analysis, and as Manager of International Space Station (ISS) Carriers Structural Analyses. Jack is a registered professional engineer. His hobbies include golf, traveling (including extensive job-related travel in Europe before retirement), and spectator sports. He is enjoying retirement.

Jodie graduated from Woodlawn High School in Birmingham in 1955. After working for attorneys and an insurance company in Birmingham, she moved to Huntsville in September, 1960 to work as a secretary at the Army Missile Command at Redstone Arsenal, AL. After two years she transferred to Marshall Space Flight Center/NASA and from 1964 to 1969 worked as executive secretary to Maj. Gen. Edmund F. O’Connor, Director of Industrial Operations under Wernher von Braun, Director, MSFC. She resigned in 1969, with the arrival of their first child, to become a full-time homemaker. Since then her interests have centered on her family, and doing volunteer work for schools and the community in her spare time. Jack and Jodie are active members of Highlands Baptist Church where Jodie teaches a Sunday School Class and is a member of the choir, and Jack has served on the Finance Committee.

Donna graduated from Lamar County High School in 1963 and attended Mississippi State College for Women in Columbus, MS for three years, majoring in Business. On 15 January 1970, she started work at the County Agent’s Office in Fayette, AL, where she worked as Administrative Support Associate for 38 years until retirement on March 31, 2008. While working she was recognized as Extension’s Secretary of the Year” in 1990. And she received the Spirit of Excellence Award in 1994 for “Outstanding Service and Contributions to Auburn University.” She is a member of the Fayette First Baptist Church where she served until recently on the Hospitality and Food Ministry Committees, and is an active member of the JOY (Just Older Youth) group.

Donna enjoys traveling with family, reading, and puttering around with flowers and container gardening. She is an active member of DAR and the Lamar County Historical & Genealogical Society. Genealogy is a hobby and she helped her mother publish a book on her side of the family in 1989.

Robert attended Lamar County High School and served two years in the U.S. Army, 18 months of which were in Germany. After his discharge, he got a job at Sterilon Mfg. in Fayette, AL, where he was working when he and Donna married. He left there to go to work for the Fayette Police Department. After working as a patrolman for two years, he resigned to attend the trade school in Hamilton, AL (while working at Arvin Industries in Fayette at night). After receiving his degree, he was one of the first to be hired at Federal-Mogul Corporation in Hamilton, AL, where he worked as a Tool & Die maker for 11 years, until his accidental death in 1984. He is buried in Sanders Cemetery near Vernon.