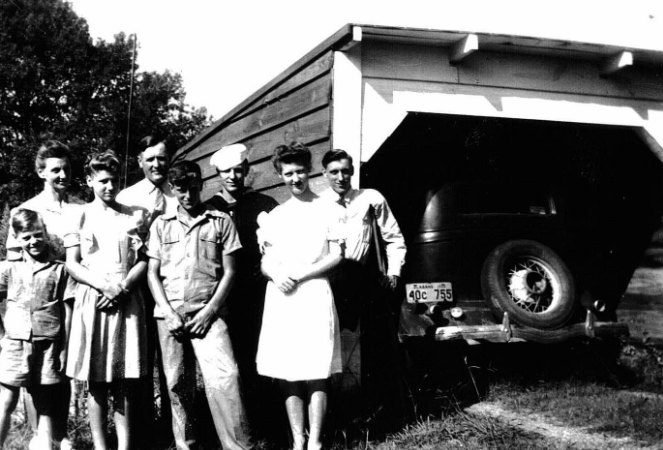 (1) Charles Tillman Sanders (b. 16 March 1921; d. 13 July 2012) m. Betty Robertson (div.)/m. Margaret Smith, (div.)/m. Eulee “Lee” Nix Colburn on 18 December 1965. Charles served in the Navy during WWII, in the Pacific Theater where his ship, the USS Russell DD-414 earned 16 battle stars. He attended two years of college at the University of Alabama, George Washington University, and the University of Maryland. He was an insurance salesman. Charles served as Lieutenant Governor of the Civitan Club in Hamilton, AL, a Board Member of the Boy Scouts, and President of the Winfield, AL Club of Life Underwriters. A graduate of Mutual Savings Insurance Company’s school, he served as a State Home Office Representative of Vulcan Life Insurance Company, and an Educator for George Washington Life Insurance Company. Charles and Lee lived in Hamilton, AL where, after retirement, he and his stepdaughter’s husband, Charles Hamilton, raised a few cows together. He is buried in the Sanders Cemetery near Vernon, AL. Charles and Margaret had one daughter, Wanda Jo.

(2) Gay Hillman Sanders (b. 10 November 1925; d. 5 October 2015) m. Guynell Ray (b. 6 October, 1929 in Hackleburg, AL). Gay took classes at the University of Alabama in Birmingham, and Guynell attended Alverson-Draughn Business College. Gay worked as Purchasing Agent and Personnel Manager at Thompson Tractor Company, Inc.-Caterpillar, in Birmingham for many years. Guynell worked as Corporate Secretary and Business Manager at Edwards Chevrolet in Birmingham for 50 years. Gay lost a leg when he was a teenager, due to a bone infection. Gay and Guynell lived in Birmingham until retirement, after which they built a home in Trussville, AL and lived there until their death. They are buried at Hackleburg, AL. They had no children.

(4) Nellie Gale Sanders (b. 8 August 1927; d. 15 November 2012). Gale attended the University of Alabama for one year. She worked as an Administrative Assistant with Pan Am Airways in Miami, FL until retirement. She and her sister, Virginia, often took advantage of Gale’s employee travel benefits with Pan Am to travel extensively worldwide. Their mother, Eunice Sanders, lived with them in Miami for several years before her death. Her remains are interred at Sanders Cemetery near Vernon, AL. Gale never married.

(5) James Ormand Sanders (b. 3 December 1929; d. 22 October 1967 in Vernon, AL) m. Vivian Case. James and Vivian lived and worked in Birmingham. They were visiting Kent and Eunice when James was thrown from a horse and critically injured. He died as a result and is buried in the Sanders Cemetery near Vernon, AL. James and Vivian had two daughters, Martha Rose and Diana Lynn.

(6) Virginia Dale “Jenny” Sanders (b. 16 July 1931). Virginia graduated from the University of Alabama. She worked with the advertising firm of Hume, Smith and Mickelberry in Miami, FL for many years. After retirement, she did some substitute teaching and helped out some in a factory owned by friends. She and her sister, Gale (now deceased), live in Miami, FL, where they were both active members and volunteer workers at Plymouth Congregational Church. For several years before her death at age 101, their mother, Eunice Sanders lived with them, and they took excellent care of her, doing everything possible to see that she was happy and comfortable. Jenny never married.

(7) Thomas Edward Sanders (b. 8 December 1935) m. Peggy Jo Atkins (b. 1938). After serving a hitch in the Navy, Tom attended Mississippi State University and earned a degree in Accounting. He worked for Mitchell Engineering Company in Columbus, MS for a time and then for Sanford Construction Company in Vernon, AL before starting his own Public Accountant business in Vernon. Tom is a member of the Kiwanis Club of Vernon. He farms (raises cows and hay) on the side. Peggy graduated from Mississippi State College for Women and worked for the Lamar County Department of Education for several years. She helped out at the office when needed, before Tom retired. They are members of Calvary Baptist Church in Vernon. They have one son, Thomas Edward Sanders, Jr.