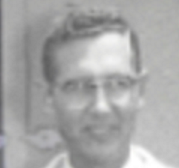 From “Family Ties and Memories” 1977.  Contributed by Billy Cunningham.  (Also see other contributions by Billy under Tillie Edwards.)

After receiving his greetings from Uncle Sam, Billy began his Naval career.  He started with boot training in San Diego, California.  Then to the University of Chicago for radio school and finally to Norfolk, Virginia for placement and assignment to the USS Kinser.  After a shake down cruise in the Bahamas, Billy and his unit proceeded through the Panama Canal and up the Pacific coast to Treasure Island, where they were loaded out and then served duty throughout the Pacific, not setting foot on land again for nine months, and then only on a small uninhabited island.  After the securing of Okinawa and the surrender of Japan, ending World War II, Billy’s convoy immediately became involved in what was the forerunner of the Korean and Vietnam conflicts by transporting Nationalist Chinese Troops from French-Indochina to Manchuria through the Formosa Straits.

Billy then returned to San Pedro, California for decommissioning and discharge on June 6, 1946.  Shortly after Billy’s discharge he visited the family and saw the sights around Hamilton.  After a short visit he left for Columbus, Ohio to visit his twin sister, Tillie, and find a job.

While in Columbus, Ohio, Billy met Birtie Rachel Campbell.  They dated quite regularly for about three months, at which time Billy decided to enter Airline Radio School in Kansas City, Missouri.  Billy and Birtie continued to correspond by letter and telephone and upon graduation from radio school and assignment to Delta Airlines, in Birmingham, Alabama, they became engaged and were married on December 1, 1947 by, and at the home of Rev. Franklin Stewart of Hamilton, Mississippi, with James and Kate Winders as witnesses.  Billy states, ‘Then for some unexplained reason, children began to arrive”.

In December of 1948,  Billy began working for the Federal Aviation Administration.  During his employment with them, he was transferred several times – from Birmingham, Alabama;  Miami, Florida; Dayton, Ohio; Cleveland, Ohio; Pellston, Michigan: and finally to Kansas City, Missouri, where he retired from Civil Service on June 30, 1972.  Upon retirement Billy and Birtie relocated in the Lake of the Ozarks country of Missouri.

They had four children. 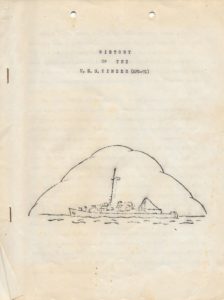 History of the U.S.S. Kinzer

This narrative was written by Billy Joe Cunningham during his service aboard the U.S.S. Kinzer (APD-91) in the Pacific Theater of World War II and gives a first-hand account of the battle history of his ship.

History of the U.S.S. Kinzer

This narrative was written by Billy Joe Cunningham during his service aboard the U.S.S. Kinzer (APD-91) in the Pacific Theater of World War II and gives a first-hand account of the battle history of his ship.